Character Stats are Modifiers that Characters posses which effect the way they are handled in Combat Calculations or other interactions with the game environment. 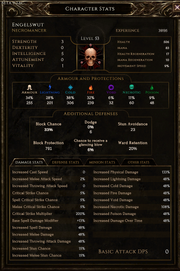 Reflects the amount of Experience that a Character has earned at the current level.

Character levels are gained by earning Experience up to level 100.

Critical Strikes are modifiers used during Combat Calculations which determines the random chance of a hit dealing more damage.

All stats which Increase or Reduce the damage are additive. Each modifier is added together and the final amount is multiplied by the base damage.

Minion Modifier Stats modify the stats of owned Minions. These are the only Modifiers which effect Minions.