The Monolith of Fate, or Monolith, is an end-game Game Feature in Last Epoch. It allows players to rediscover all the possibilities of history and construct new timelines.

The Monolith of Fate can be accessed from the The End of Time, found next to Agony. It can also be travelled to from the World Map, by choosing an unlocked timeline in The End of Time.

The Monolith of Fate contains timelines, each of which tells an alternate flow of events. They can be progressed to their end in order to receive a blessing that grants various buffs to the character.

Each timeline can be progressed by completing its echo missions, each having a specific Zone map and Quest objective. Echoes also grant modifiers to Enemies, increasing item rarity and Experience gained, which can last to a set number of echoes.

Timelines also contain three Quest Echoes each, which are milestones in progressing the story of the timeline. These can be unlocked once the timeline garnered enough stability. Completing the final Quest Echo also completes the timeline, conquering it.

Timelines are interconnected on the World Map, and they can be unlocked successively by unlocking paths in their stories.

Each timeline can be navigated an Echo Web that branches out from the main node. Echoes can be completed to gain specific rewards and stability, which can be used to access Quest Echoes of the timeline. An Echo is completed when the player fulfills all of its objectives and successfully portals out afterwards.

The Web can contain special echoes, which can be used to gather information or influence the properties of the timeline:

Each of these quest objectives has a chance of appearing on a Monolith of Fate timeline. You will not know the objective until you have spawned into the timeline:

Special nodes have their own set of objectives, which can be viewed

Each echo grants benefits for monsters, making them more formidable and harder to beat. These can increase their statistics, bolster their damage, or adding ailments on hit.

In exchange for an added challenge, modifiers grant increased experience gain and item rarity, resulting in better items in average. Modifiers have a set number of echoes to last, and they cycle out, as echoes are conquered.

Echo of a World nodes contain the Shade of Orobyss, whose defeat brings corruption on the timeline. Corruption adds a permanent monster health and damage modifier to all echoes, while increasing the amount of stability echoes can bring, monster level, item rarity and experience gained.

Quest Echoes are special missions, which lay out the lore in a selected timeline with unique scenarios and a series of objectives. In the end, they award the player with a small amount of gold and experience. Each timeline consists of three Quest Echoes, which must be completed one after another.

The third (and last) Quest Echo involves fighting a boss. Defeating it yields a guaranteed item drop from its unique drop pool, as well as a blessing that buffs the player character. Each boss has four items to offer: two common items, one scaling with item rarity, and a very rare one available in the Empowered timelines. 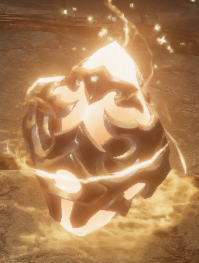 A treasure chest for opening is rewarded after portalling out and completing the Echo, proportional to the enemies killed. The chest can drop any type of items, glyphs and runes.

Echoes also grant an additional node-specific reward, if completed on the first attempt:

As a reward for completing a timeline, a player is given a choice of at least three blessings, of which one can be activated. Blessings are permanent buffs for your character, which can be rerolled/swapped out by completing the timeline again. You can have only one blessing equipped per timeline.

After all level 90 timelines are conquered, you can activate Empowered Mode by touching the crystal at their junction, opening up Legendary timelines. It's always possible to select between Normal and Legendary versions of the same timeline, each having its own Echo Web.

Legendary timelines have all areas scaled to level 100, as well as setting their corruption to a minimum of 100. Quest Echo bosses also get a chance to drop their most exclusive items. Legendary timelines also offer Grand Blessings: amplified versions of regular Blessings with higher bonuses.